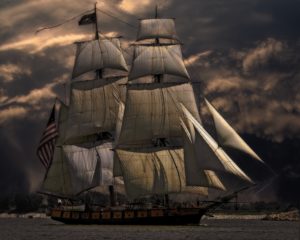 In a recent decision by the Supreme Court in Allen v. Cooper, Governor of North Carolina the Court opined that States are immune from copyright infringement. While the Court noted that Congress may still act to remove this blanket immunity that the States have over copyright infringement, this holding makes clear that States generally have freedom to behave as copyright pirates until Congress acts. Following this decision, we have already seen action by multiple members of Congress, asking the U.S. Copyright Office and U.S. Patent and Trademark Office to begin a study on the extent of patent and copyright infringement by State governments.

This case dates back to 1996 when a marine salvage company named Intersal discovered the shipwreck of the Queen Anne’s Revenge off the North Carolina Coast. The ship at the center of this case was a French slave ship that was captured by Blackbeard and became his flagship before running aground on a sandbar in North Carolina. Following the discovery, ownership of the shipwreck was held by North Carolina under federal and state law but the State hired Intersal to conduct recovery operation. Intersal then hired videographer Frederick Allen to document the recovery efforts. Allen recorded videos and took photos of the recovery efforts for over a decade and registered copyrights in all of his works.

The actions the led to the suit started when North Carolina began using Allen’s works in various publications. In 2013, Allen altered the State that it was infringing his copyrights and a settlement was reached where the State paid Allen $15,000 and defined the parties’ respective rights to Allen’s works. Allen later alleged that the State had, without permission and presumably in breach of the settlement, posted more of his videos and photos. The State refused to admit any wrongdoing and Allen filed suit in Federal District Court charging the State with copyright infringement. North Carolina then moved to dismiss the lawsuit on the grounds of state sovereign immunity. Allen argued that the Copyright Remedy Clarification Act (“CRCA”) of 1990 removed the States’ sovereign immunity in copyright infringement cases and the District Court agreed, finding a clear congressional intent in the Act’s text that supported Allen’s argument. The Fourth Circuit then reversed based on an alternative reading of case law and the case was then heard by the Supreme Court.

The primary argument here is whether Congress has the authority to abrogate the State’s immunity. As a general principle, a federal court may not hear a suit brought by any person against a nonconsenting State. However, such a suit is allowed if Congress has (1) enacted unequivocal statutory language abrogating the State’s immunity from suit and (2) there is some constitutional provision that allows Congress to encroach on the State’s sovereignty. In the early 1990s, Congress passed two statutes related to the abrogation of State’s immunity from patent and copyright infringement suits and this case addresses the copyright statute and whether the statue has the necessary constitutional basis to allow a person to file a suit against a nonconsenting State.

The Supreme Court discussed the history of the two statutes passed in the 1990s that intended to remove the States’ immunity from patent and copyright suits. The CRCA specifically states that a State stands in the identical position as a private defendant – exposed to liability and remedies in the same manner and to the same extent. The Court concluded that the first prong described above was met and that there could be no doubt that Congress intended to abrogate the States’ immunity from copyright infringement suits. This left the final prong, whether Congress had authority, as the only question remaining to determine if Allen could bring his case against North Carolina.

The Court then addressed the authority that Allen believed provided Congressional authority. The first was Article I where Congress was provided the power to promote the progress of science and use arts by granting copyrights and patents. However, previous decisions by the Court held that Article I cannot be used to circumvent the limits sovereign immunity places upon federal jurisdiction. The Court summarized this by stating that “the power to secure an intellectual property owner’s exclusive Right under Article I stops when it runs into sovereign immunity.” Next, Allen argued that Section 5 of the Fourteenth Amendment provides the necessary constitutional authority because it gives Congress the power to enforce limitations on the States’ authority it the States’ deprive any person of life, liberty, or property, without due process of law. However, the Court went into detail about how the statute, when created, was not aimed to redress or prevent unconstitutional conduct by the States’ and was therefore does not trigger the power provided by Section 5 of the Fourteenth Amendment. The majority of the Court concluded their opinion by saying that while the arguments presented in this case to do not support the removal of States’ immunity from copyright infringement, Congress is not prevented from utilizing the series of opinions, including Allen v. Cooper, to tailor a statute that would abrogate States’ immunity and “bring digital Blackbeards to justice.”