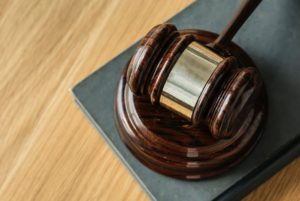 The IPR process, as introduced by the America Invents Act of 2011, allows any person (other than the patent owner) to file a petition with the USPTO with request for cancellation of one or more claims of a previously issued patent on the grounds that the claim fails the novelty or non-obviousness standards for patentability. Before the USPTO Director can institute an IPR, the Director must determine that there is a reasonable likelihood that the petitioner would prevail with respect to at least one of the claims challenged. Once instituted, the PTAB examines the patent’s validity. The petitioner has the burden of proving unpatentability by a preponderance of the evidence. If there is no agreement between the patent owner and the petitioner to settle the case, the PTAB must issue a written final decision no later than a year after it notices the institution of inter partes review. If the Board’s decision becomes final, the Director must issue and publish a certificate. The certificate cancels patent claims finally determined to be unpatentable, confirms patent claims determined to be patentable, and incorporates into the patent any new or amended claim determined to be patentable. If a party is dissatisfied with the Board’s decision, they can seek judicial review in the Court of Appeals for the Federal Circuit. When reviewing the Board’s decision, the Federal Circuit assess the Board’s compliance with governing legal standards de novo (i.e., without reference to any legal conclusions made by the PTAB) and its underlying factual determinations for substantial evidence.

Oil States Energy Services and Greene’s Energy Group are both oilfield services companies. Oil States obtained a patent in 2001 relating to an apparatus and method for protecting wellhead equipment used in hydraulic fracturing and in 2012 sued Greene’s Energy for infringing the patent. Greene responded by challenging the patent’s validity and also petitioned the USPTO to institute inter partes review. The USPTO found that Greene had established a reasonable likelihood that the two challenged claims were unpatentable and, thus, instituted inter partes review. Both proceedings progressed in parallel with the District Court ruling in favor of Oil States and then the USPTO issuing a final written decision concluding that the claims were unpatentable. Oil States sought review in the Federal Circuit challenging the Board’s decision as well as challenging the constitutionality of inter partes review.  The Federal Court affirmed the Board’s decision in favor of Greene that the claims were unpatentable.  Oil States, in challenging the constitutionality of inter partes review, argued before the Supreme Court that actions to revoke a patent must be tried in an Article III court before a jury.  Oil States wanted the Court to recognize patent rights as the private property of the patentee which would bring it into the domain of Article III Courts.  Article III vests the judicial power of the United States in one Supreme Court, and in such inferior Courts as the Congress may from time to time ordain and establish. Consequently, Congress cannot confer the Government’s judicial power on entities outside Article III. When determining whether a proceeding involves an exercise of Article III judicial power, the Court’s precedents have distinguished between public rights and private rights. Those precedents have given Congress significant latitude to assign adjudication of public rights to entities other than Article III Courts.

The Supreme Court held that the determination to grant a patent is a matter involving public rights and need not be adjudicated in Article III court.  By issuing patents, the USPTO takes from the public rights of immense value, and bestows them upon the patentee. Specifically, patents are public franchises that the government grants to the inventors of new and useful improvements. The franchise gives the patent owner the right to exclude others from making, using, offering for sale, or selling the invention throughout the United States. Additionally, granting patents is one of the constitutional functions that can be carried out by the executive or legislative departments without judicial determination. When the USPTO adjudicates the patentability of inventions, it is exercising the executive power. Inter partes review involves the same basic matter as the grant of a patent, and it therefore falls on the public rights side of the line. Like the initial review, the Board’s inter partes review protects the public’s paramount interest in seeing that patent monopolies are kept within their legitimate scope.

The Oil States makes clear the power of Congress to provide the USPTO with broad post-issuance authority. In other words, the status quo remains in the US patent market. From a patent valuation perspective, IPRs have already negatively impacted the value of patents due the uncertainty coupled to these proceedings. The Oil States decision reinforces the constitutionality of IPR proceedings and may further complicate the processes by which patent owners monetize their assets and would add Oil States to the list of cases such as Alice and Mayo that reinforce the uncertainty in the market regarding the patentability of cutting edge inventions.

While the Supreme Court’s Oil States decision has been largely anticipated by the IP community, one should review it in conjunction with Andrei Iancu’s recent public statements, which might arguably be the more interesting development this week. Director Iancu’s statement that “human-made algorithms that are cooked up, invented as a result of human ingenuity are different from discoveries and mathematical representations of those discoveries” might signal an effort by the Director to push for changes in validity considerations that would include these algorithms that can be distinguished from mathematical representations of discoveries. This statement may signal the emergence of a market for patents claiming algorithms, a market that currently resides behind NDAs and trade secret protection.

** Foresight’s commentary to Oil States, along with the commentary of other industry leaders, was published by IPWatchdog.