At a high level, it seems like many of the trends observed in 2015 continue into 2016: the global number of filings and grants keeps trending up; China continues to dominate in terms of annual filings and grants (breaking another record of 1.3 million filings this year); and the top 10 filing companies worldwide are all Asia-based multinationals. 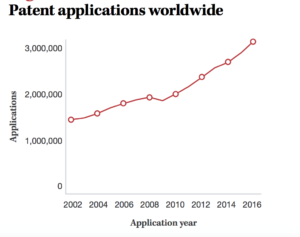 Driving the strong growth in global filings was an exceptional number of filings in China. The State Intellectual Property Office of the People’s Republic of China (SIPO) received 1.3 million patent applications in 2016 – more than the combined total for the United States Patent and Trademark Office (USPTO; 605,571), the Japan Patent Office (JPO; 318,381), the Korean Intellectual Property Office (KIPO; 208,830) and the European Patent Office (EPO; 159,358). Together, these top five offices accounted for 84% of the world total in 2016.

Below is a summary table showing the activity in the top 10 IP Offices in 2016:

When it comes to understanding China’s continued explosive growth in new patent applications – over 1.3 million filed in 2016, an increase from the 1.1 million in 2015 (the first year the 1 million filings barrier has been exceeded in any country) — the circumstances surrounding the increase in Chinese patent filings are unique and should have come as no surprise to anyone following the Chinese government’s five-year plan of 2011. As explained in an article published in Nov. 2016 in the EE Times by Foresight’s president, Efrat Kasznik, over the last 50 years the Chinese Communist Party implemented a series of five-year plans which guided China’s rapid economic growth.  The 2011 five-year plan’s themes of sustainable growth included some specific targets for patent filing per capita.  The increased filing activity over the last five years is the direct result of a calculated government effort, enabled by an unprecedented allocation of legislative and administrative resources to support China’s State IP Office. Thus, the sharp rise in Chinese patent filings between 2010 and 2016 is very unique to China’s political circumstances, and is not necessarily correlated with the natural progression of innovation. 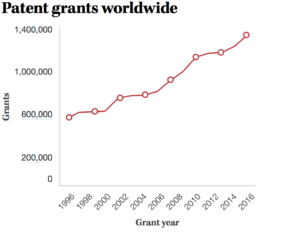