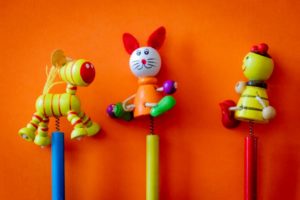 The Toys “R“ Us bankruptcy has been in the news over the last year. The company’s downfall has been well documented, and the unfortunate fate of the brand that has been ubiquitous in the toy world for several generations of kids and parents was emotional for many. Although a variety of shortcomings of the company’s long-term strategy and operations have come to light, it seems that a solid intellectual property strategy may be offering the toy retailer a small “saving grace” as its story comes to a close – or at least some hope for the company’s creditors.

As part of the bankruptcy proceedings, Toys “R” Us is auctioning off much of its intellectual property (IP) to help cover its debt and legal fees. The IP in the sale includes the Toys “R” Us name, the Babies “R” Us brand, a collection of domain names, and the beloved Geoffrey the Giraffe mascot and logo.  More specifically, according to an article on Entrepreneur.com, the sale of the IP is expected to cover $200 million in debt and anticipated legal fees of up to $348 million (fees which they keep accruing at an astounding rate of $1,745/hour, according to one NY Times article)– for a total of nearly $550 million. Important to note is that the IP value proxy for Toys “R” Us was determined based on a likely value to be realized at an auction. Historically, intangible assets have sold at steep discounts through the auction process, and the true value of the IP assets is presumably much greater in the hands of the buyer.

According to US generally accepted accounting principles (GAAP) as well as the international financial reporting standards (IFRS) a company’s internally-generated intangible assets, including brands and related trademarks, are not reported as an asset on the company’s balance sheet.  As a result of this reporting gap, investors, as well as the general public, never gain a full understanding of the fair value of such intangible assets. In this case, although an official valuation of the Toys “R” Us brand has not been disclosed in the company’s financial statements, we get a glimpse at just how valuable a solid IP portfolio can be, as we see its potential to cover millions in debt and legal fees. For purposes of this post only, we compared the anticipated IP value of $548 million against Toys “R” Us’ last available balance sheet as of October 28, 2017, as seen below: 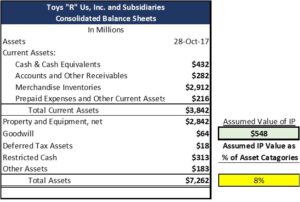 We specifically highlight the comparison of IP value to the Total Asset Value of Toys “R” Us. We see that the assumed IP value represents 8% of the total reported assets for the company – a significant proportion for an asset that goes unreported. Naturally, one would classify any asset representing 8% of the total book value as a fairly significant asset. However, when we look at some of the world’s most valuable consumer brands, we see that brands can actually have the potential to account for a far more significant portion of Total Asset Value, as reported on the balance sheet. Every year, Interbrand (a UK-based marketing consulting firm) publishes its “Best Global Brand Rankings” in which it ranks companies by the value of their respective brands. To better understand the hidden, off balance sheet value of IP assets, we applied the same IP Value-to-Total Asset Value ratio that we examined with Toys “R” Us to 3 of the top-ranked consumer brands in the study. According to Interbrand’s 2017 brand ranking study, Apple, Coke, and Nike boast brand values of $184 billion, $70 billion, and $27 billion respectively. Taken alone, these values are significant; however, when compared to the Total Asset  Value on each company’s balance sheet, we begin to see the true magnitude of these unreported assets. Below is a table showing the brand value as a percentage of the most recently reported Total Asset Value for each of these 3 companies:

It is eye opening, to say the least, seeing the relative value of these “hidden” assets for some of the world’s largest companies. Nike, for example, owns a brand that is worth over 100% of the total value of its publicly disclosed assets. Apple’s brand is reportedly worth 50% of its total asset value – and it is important to remember that the Interbrand values do not include other forms of IP, such as patents, technology, know-how, etc. which are highly valuable intangible assets for Apple.

Since internally generated intangible assets are not reported in financial statements, in many cases, the public does not gain an understanding of the assets’ fair value until these assets are sold independently or as part of an M&A deal.  When a company experiences financial distress and is forced to liquidate its assets to pay back creditors (see the Nortel IP auction for one of the most famous instances), often IP assets are the only assets which have value, since they can be monetized at the hands of a new buyer. Such is the case with Toys “R” Us; we did not see the true value of Geoffrey the Giraffe until it was too late.